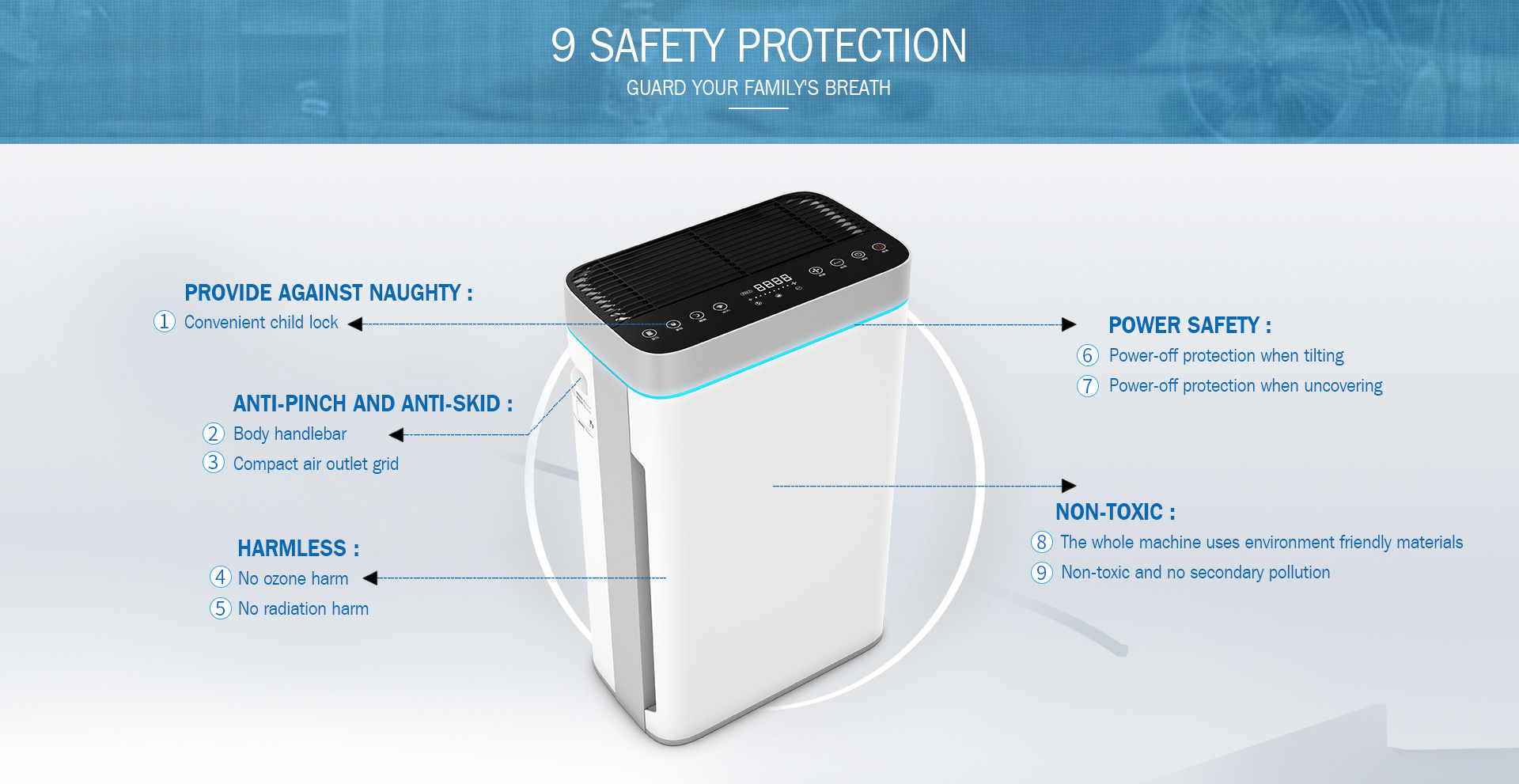 Is the home air purifier useful? The role of the home air purifier
1. Remove chemical gases such as formaldehyde, ammonia, and benzene.
The air purifier can effectively neutralize volatile organic compounds, formaldehyde, benzene, ammonia, insecticides, aerosol hydrocarbons, harmful gases emitted from paint, and avoid physical discomfort caused by inhaling harmful gases.
2, effectively eliminate odor
The air purifier can effectively remove the strange smell and polluted air emitted from chemicals, animals, tobacco, cooking fumes, cooking, decoration, garbage, and replace the indoor gas 24 hours a day to ensure a virtuous cycle of indoor air.
3. Remove microorganisms and pollutants from the air
The air purifier can effectively kill and destroy bacteria, viruses, mold, and mold in the air and on the surface of the object, and at the same time remove dead dandruff, pollen and other sources of disease in the air, and reduce the spread of disease in the air.
4. Settling particles in the air
The air purifier can effectively settle various inhalable suspended particles such as dust, coal dust, smoke and fiber impurities in the air to prevent the human body from breathing to these harmful floating dust particles.
Is domestic air purifier useful? Limitations of home air purifiers
1, can not reduce the concentration of indoor carbon dioxide
Although the air purifier can remove indoor harmful gases and particulate matter to some extent, it cannot absorb carbon dioxide and cannot reduce the concentration of carbon dioxide.
2, in the closed space to be effective
The air purifier works by capturing, adsorbing and destroying harmful substances in the air. When the indoor air flows, it cannot effectively capture harmful molecules in the air. At this time, its effect is not large.
3, the scope of purification is small
Generally speaking, the air purifier only effectively purifies the air of 2 meters in a circle. Exceeding this range, its purification is limited. Many merchants in the market will exaggerate the purification range of the air purifier.
Another type of air purifier – fresh air system
The fresh air system is a device that can help indoor ventilation and ventilation. After the fresh outdoor air is treated, it is introduced into the room, and the indoor polluted air is discharged to the outside, thereby ensuring the circulation of indoor air and ensuring that the indoor time is fresh. Air to meet the needs of the human body. In addition, the fresh air system has a certain air purification filter function, and he can continue to deliver fresh air to the room 24 hours a day. (Detailed introduction of the fresh air system)
The fresh air system uses special equipment to send fresh air to the indoors from the other side and then discharges from the other side to the outdoor by special equipment, thereby forming a “new wind flow field”, thereby meeting the needs of indoor fresh air ventilation. The functions of the fresh air system include the following aspects:
1. Discharge indoor dirty air: The uninterrupted operation of the fresh air system can effectively discharge carbon dioxide and various odorous gases exhaled by indoors and animals, including harmful gases such as smoke, formaldehyde, and benzene.
Second, energy-saving: the fresh air system consumes less energy, no need to open the window for ventilation, can effectively reduce the energy consumption of winter heating and summer cooling.
Third, anti-mildew and odor: the indoor humid dirty air, to eliminate odor, to prevent mold and bacteria, is conducive to extending the life of buildings and furniture.
Fourth, safe and convenient: avoid the property and personal safety hazards caused by window opening, even if no one at home can automatically breathe fresh air.
Contact us for more products and discounted prices
Helen:
+86 13922346046
info@olansiglobal.com
https://www.olansiglobal.com
Posted in Air Purifier News and tagged top 10 home air purifiers, top 5 best air purifiers, top air purifiers for allergies.