Is it necessary to use a car air purifier? 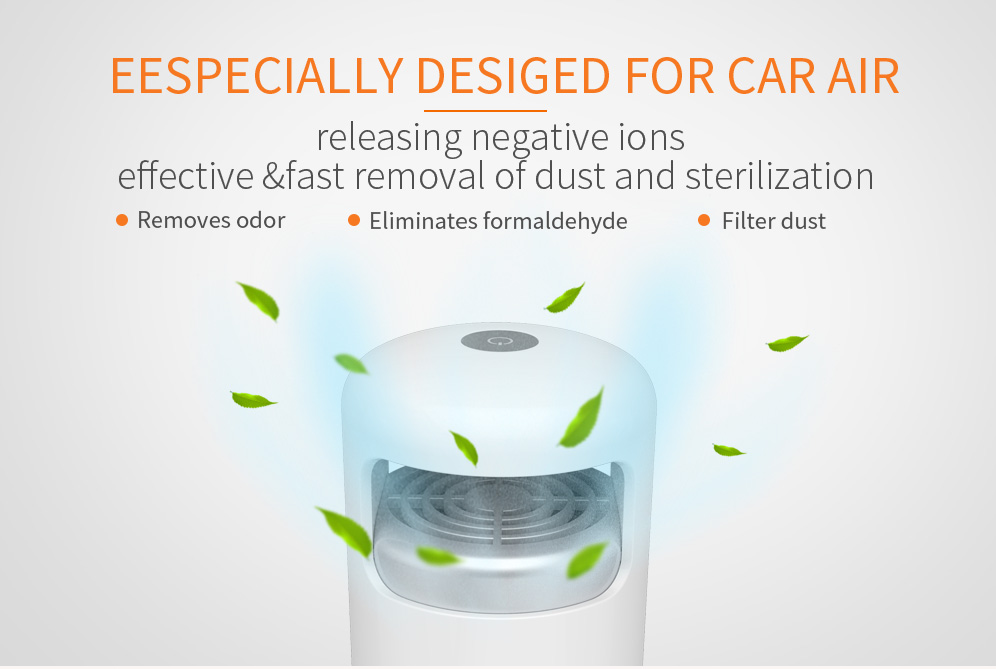 Is it necessary to use a car air purifier?
l What is pollution inside the car?
Air pollution inside the vehicle refers to the poor air quality caused by the lack of ventilation and car body decoration inside the car. The air pollution source in the car mainly comes from the car body itself and decorative materials. The toxic substances such as formaldehyde, xylene, and benzene have the most serious pollution consequences.
l What are the sources of pollution?
New car itself
The market demand for family cars in China has caused many cars to enter the market directly under the production line. The harmful gases and odors of various accessories and materials have not been released. The plastic parts, carpets, roof felts, sofas, etc. installed in the car are not Strict environmental protection requirements that will directly cause air pollution inside the car. Therefore, controlling the pollution inside the car should start from the manufacturer and carry out strict odor control for each material entering the car.
Interior decoration
Most consumers have to decorate the car after they buy a car. Some cars have to be re-decorated for a while, and some dealers also use the car to send decoration as a preferential condition, some rubber containing harmful substances, The seat cushion and the adhesive enter the car. The toxic gases contained in these decorative materials mainly include benzene, formaldehyde, acetone, xylene, etc., which will inevitably cause air pollution inside the car, which makes people unconsciously poisoned and gradually develops headaches. , fatigue and other symptoms. In severe cases, dermatitis, asthma, low immunity, and even leukopenia can occur!
Automotive air conditioner evaporator
If the car air conditioner evaporator is not cleaned for a long time, it will have a lot of dirt inside it, and the harmful substances such as amine, nicotine, and bacteria will be diffused in the small space inside the car, resulting in poor air quality inside the car. Hypoxia. At the same time, due to the narrow space of the car, the new car has better sealing performance, the air circulation is not smooth, the air volume inside the car is not much, and the cross-contamination between the passengers in the car is serious. The harmful gas in the car exceeds the standard indoor harmful gas. Excessive standards are more harmful to the human body. When the concentration of carbon dioxide in the air reaches 0.5%, people may experience headache, dizziness and the like.
Smoking inside the car
If the driver or passenger smokes, it will not only greatly increase the level of air pollutants such as volatile organic compounds, carbon monoxide and dust, but the odor emitted by it may stay in the cabin for a long time.
l What are the harmful substances in the car?
formaldehyde
Formaldehyde is a pure syrup that binds to proteins. After inhaling high concentrations of formaldehyde, it can cause severe irritation of the respiratory tract and eye irritation, headache, and bronchial asthma. Formaldehyde is used in synthetic resins, surfactants, plastics, rubber, leather, and other materials as well as in disinfection, fumigation and preservation.
benzene
Benzene is volatile and is a widely used raw material in the industry. High concentrations of benzene have anesthetic effects on the central nervous system, which can cause acute poisoning; long-term exposure to benzene is harmful to the hematopoietic system.
Toluene
Toluene is similar to benzene. Inhalation of higher concentrations of toluene in a short period of time can cause obvious irritation of the eye and upper respiratory tract, conjunctival and pharyngeal congestion, dizziness, nausea, gait, and confusion.
Xylene
When a person inhales a high concentration of toluene or xylene in a short period of time, symptoms of central nervous anesthesia may occur. Xylene is mainly derived from synthetic fibers, plastics, fuels, rubber and other materials and paints, coating additives and adhesives, waterproof materials.
TVOC
TVOC is one of the more serious three organic pollutants in the air. It can cause the body’s immune level to be imbalanced, affecting the central nervous system and digestive system function, severely can damage the liver and hematopoietic system, and allergic reactions occur.
l What is a car air purifier?
Car air purifiers, also known as car air purifiers, car air purifiers, are air purifying equipment dedicated to purifying the odor, toxic and harmful gases, bacteria and viruses in the car air.
l What are the applicable populations?
1. Pregnant women: Pregnant women may feel general malaise in indoors with serious air pollution, such as dizziness, sweating, dryness of the throat, chest tightness and vomiting, which may have adverse effects on fetal development. The risk of developing heart disease is three times that of a pregnant woman who breathes fresh air.
2, children: children’s body is developing, the immune system is relatively fragile, vulnerable to indoor air pollution, resulting in decreased immunity, physical development retardation, induced blood diseases, increased incidence of asthma in children so that children’s intelligence is greatly reduced.
3. Office family: An enviable career when working in a high-end office building. However, in a temperature-constrained environment with poor air quality, it is easy to cause dizziness, chest tightness, fatigue, emotional ups, and downs, etc., affecting work efficiency, causing various diseases, and severe cases can also cause cancer.
4, the elderly: the elderly physical function decline, often a variety of chronic diseases ridden. Air pollution not only causes respiratory diseases such as bronchitis, pharyngitis, and pneumonia in the elderly. It also induces heart and blood vessel diseases such as high blood pressure, heart disease, and cerebral hemorrhage.
5, respiratory disease patients: long-term living in polluted air will cause respiratory function decline, respiratory symptoms aggravated, especially rhinitis, chronic bronchitis, bronchial asthma, emphysema, and other diseases. Auxiliary and radical treatment is achieved by breathing pure air.
6, the driver: the car is lack of oxygen, car exhaust pollution is serious.
Contact us for more products and discounted prices
Helen:
+86 13922346046
info@olansiglobal.com
https://www.olansiglobal.com
Posted in Air Purifier News and tagged Air purifier allergies, Air Purifier Service Provider, Indoor air quality.