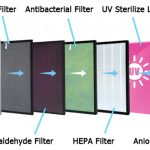 Even a very low level of PM2.5 will quietly add to the death of cardiopulmonary disease. WHO Director-General Tedros Adenom Gebrisos believes that air pollution is a ‘new tobacco’.

Arden Pope believes that air pollution is more like second-hand smoke, living in areas with serious air pollution, more like living with people who smoke 2 or 3 packs a day. According to a study conducted by University of California scholar Richard Muller, in 2018, the average air pollution hazard of American residents is equivalent to 1/3 cigarettes per day. Recent studies have shown that breathing in lightly polluted air for 10 years causes the type of lung damage to be the same as smoking a pack of cigarettes a day for 29 years. In order to give people a clearer understanding of the degree of air pollution, two scholars in Paris, France, have developed an APP. This app can be converted into how much cigarettes to smoke based on the degree of air pollution. More and more research shows that from the brain to the bones, air pollution has barely missed any organ.

To alleviate environmental pollution is to let go of human beings.