Be alert to indoor air pollution

According to a survey by the US Environmental Protection Agency, the degree of air pollution in many buildings is several times that of outdoor. A World Health Organization data shows that nearly half of the world’s people are exposed to indoor air pollution, resulting in 22% of chronic lung disease and 15% of bronchitis and bronchitis. According to statistics, 24 million deaths worldwide each year are closely related to indoor pm2.5.

Almost all residential buildings and many commercial buildings do not have ventilation systems installed, and the buildings are poorly ventilated, which is an important cause of indoor pollution. In addition, although many decoration materials have no obvious odor, harmful substances such as formaldehyde, benzene and ammonia still exist. The China Indoor Environmental Monitoring Committee found that 72.2% of children’s rooms exceeded the standard by 1 to 8 times.

According to information released by indoor environmental protection agencies, indoor air pollution is mainly caused by indoor pollution caused by indoor decoration pollution, furniture pollution, kitchen fumes and outdoor heavy polluted air. The harmful substances mainly include formaldehyde, benzene, ammonia and Pm2.5 Respirable particulate matter, etc. Women and children are the greater victims of indoor air pollution, and indoor air pollution is associated with a greater degree of death from diseases such as ischemic heart disease, stroke, lung cancer and chronic obstructive pulmonary disease. A survey of 10 departments in the relevant departments found that the incidence of asthma in children has continued to increase over the past 20 years, and the growth of asthma is closely related to indoor pollution.

The office and the bedroom, kitchen and living room in the home are the hardest hit areas for indoor air pollution. In addition to the common culprit of decoration pollution, these places also have different sources of pollution.

Office people are more polluted. Some compounds that are excreted by breathing, sweat, etc., coughing, sneezing, and other biological contaminants are serious. Office appliances can also cause indoor air pollution. Professor Lydia Moravska of the Queensland University of Technology in Australia found that the concentration of fine particles released by the printer is comparable to that of second-hand smoke. It can increase air pollution by a factor of five, causing respiratory diseases and causing heart disease and even heart disease. cancer.

Most of the pollution in the bedroom comes from bedding. The bedroom is mainly made up of dust on the bottom of the bed, carpet and air conditioner. When walking or shaking the quilt, it is easy to lift it into the lungs. Professor Cai Shaozhen, director of the Department of Respiratory Medicine at the Southern Hospital of Southern Medical University, said that the dust mites on the sputum and the dandruff from the body, if inhaled, may cause an allergic reaction.

The China Quality Miles Home Air Pollution Survey report shows that 70% of household pollution originates from the kitchen. A study by the University of Sheffield in the United Kingdom found that when cooking with gas, the amount of nitrogen dioxide in the kitchen was up to three times that of the outside world, and the dust concentration was higher than outside. In addition, the common open flame, the higher temperature, easy to accelerate the release of formaldehyde and other pollutants in the cabinet.

The living room has a wide range of pollutants. Smoke caused by smoking, pollen from flowers, hair from pets, bacteria carried, and dust brought back from outside can cause allergic reactions, respiratory diseases, and even cancer.

Compared with the smog in the outdoor air, the indoor pollution components are more complicated, and the respirable particles are from 0.01 micrometer to 10 micrometers, and contain various carcinogens, allergens and the like. Nowadays, it is widely known that smog hurts the lungs, and masks are usually worn when going out, but indoors, people don’t wear masks and expose themselves to pollution. Harmful gases such as formaldehyde in furniture and decoration materials can induce skin allergies and leukemia; the burning of gas in the kitchen and the pyrolysis of food can cause lung cancer. The Cancer Research Institute of Tongji University in Shanghai found that women who have been exposed to high-temperature soot for a long time have a 2 to 3 times higher risk of lung cancer. In indoor smoking, smoke contains more than 7,000 compounds, including 69 types of carcinogens and 172 harmful substances. Can cause lung cancer, heart disease, bronchitis and asthma.

The indoor space is small and the concentration of harmful substances is relatively high. The Shanghai CDC and Fudan University tests confirmed that the bacteria and molds in most household air conditioners exceeded the standard, even exceeding the central air conditioning of the mall by 50 times. Experiments have shown that smoking a cigarette in a confined space of 35 square meters produces a concentration of pm2.5 that is more than 30 times the normal value. Micro-particles from second-hand smoke account for about 90% of the total indoor pm2.5. As long as you can smell the smoke in the room, pm2.5 has already exceeded the standard by at least double. Professor Cai Shaowei reminded that the tiny particles produced by smoking will remain on clothes, walls, carpets, furniture and even hair and skin. A little activity or air circulation will rise back into the air.

The above-mentioned effects of indoor air pollutants on health are long-term and chronic. In the early stage, dry eyes, lethargy, memory loss, etc. may occur. Long-term exposure may cause sore throat, acute or chronic pharyngitis, allergic asthma, rash and the like. But unfortunately, many people are not aware of it and delay treatment.

How to use the air purifier?

How to use the air purifier? When to use The air purifier is generally used when the indoor air quality is not good. In the case of outdoor air quality is better and the temperature is suitable for ventilation, it should be properly ventilated. Take the decoration pollution such as formaldehyde as an example. Newly renovated houses, wanting to remove indoor formaldehyde, is a long process, and the best way is to insist on ventilation.

Even in 3 to 5 years, it is best to open the window frequently, do not let the room be closed for a long time. Only when it is not suitable for ventilation, such as severe outdoor fog, wind and rain, outdoor temperature is too high or too low, in these cases, the door and window can be used to remove formaldehyde by using an air purifier. In addition, even in the air purifier with excellent formaldehyde removal effect, the formaldehyde content in the room cannot be completely removed.

Because the air purifier only removes the formaldehyde that is volatilized and freed in the air, and the chemical harmful substances such as formaldehyde deep in the decoration materials and the superficial layer of the furniture are continuously volatilized, and the volatilization period is more than 15 years, so The use of air purifiers is also a long-term need.

In this long process, as long as the formaldehyde content is less than 0.08 mg per cubic meter or less (of course, the lower the better), it is a safe range, and does not require excessive pursuit of zero formaldehyde environment. Therefore, fundamentally, the air purifier is complementary to the fresh air outside the ventilated breathing room. Just as we can’t ventilate all year round, we can’t rely too much on air purifiers. 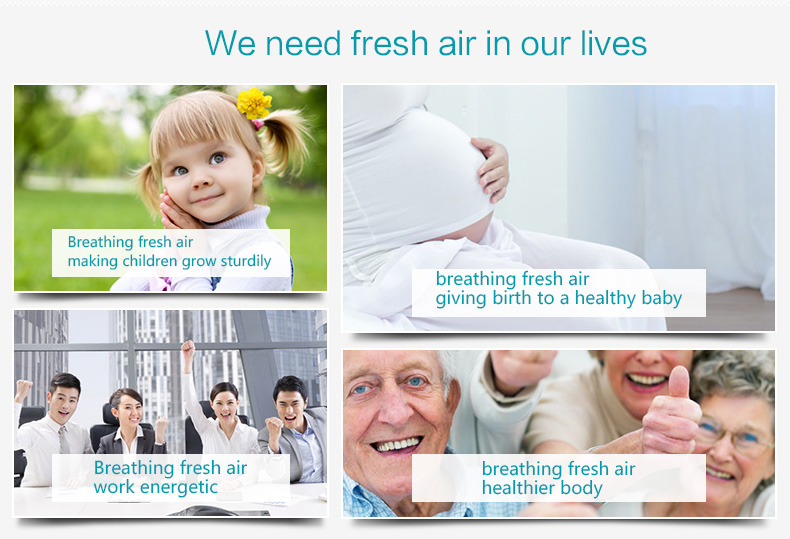 The function of the air purifier is to clean the existing air in the room, while the fresh air system realizes indoor and outdoor air circulation through the exhaust and air supply ducts, and at the same time purifies the air that is sent in, and realizes full heat exchange. Whether it is a fresh air system or an air purifier, the filter is used to clean the air, and the filter screen needs to be replaced regularly. If the replacement is not timely, the risk of secondary pollution will occur.

Therefore, if only from the air purification principle, the air purifier and the fresh air system are the same, whether it is HEPA filter, activated carbon filter, electrostatic dust collection, silver ion purification, negative ion purification, are based on the following principles First, using the principle of inertial collision adsorption, after the change of the direction of airflow movement, the contaminated particles will move linearly under the influence of inertia, and then be absorbed by the filter material. Second, diffusion adsorption, which is carried out by using Brownian motion. An adsorption, the particles from the gas flow to the surface of the fiber, under the influence of static factors, directly adsorbed by the fiber, have a better effect on the filtered gas; third, direct adsorption, the particles in the particle larger than the filter medium adsorption interception, The smaller the pore size, the higher the adsorption efficiency and the better the particle removal rate.

Since the fresh air system and the air purifier use the same air purification technology, can the two completely replace each other?

The air purifier purifies the existing air in the room, causing people to feel a sense of sorrow when the air purifier is turned on for a long time. At this point, window ventilation can make outdoor air pollutants enter the room unobstructed, which is obviously not feasible. The fresh air system can achieve indoor and outdoor air circulation without opening the window, thus reducing the feeling of depression. Although some fresh air systems have the function of purifying the air, in the case of extremely serious air pollution, the filtration capacity of the fresh air system is insufficient, and the air entering the room is still not clean enough. If the filtration capacity of the fresh air system is strengthened, the amount of air sent into the room may be reduced, and the air pressure difference between the indoor and outdoor areas may occur, and the outdoor polluted air will enter the room through the gap between the door and the window.

Although fresh air systems and air purifiers use the same technology for purifying the air, the core functions of the two are not the same. In addition, whether the introduction of outdoor air to achieve ventilation and ventilation is the main difference between the two, which makes the fresh air system and the air purifier can not completely replace each other, only the two complement each other, can maximize indoor air cleaning, enabling people to Breathe quickly.

Focus on OEM/ODM for  air purifiers for 10 years