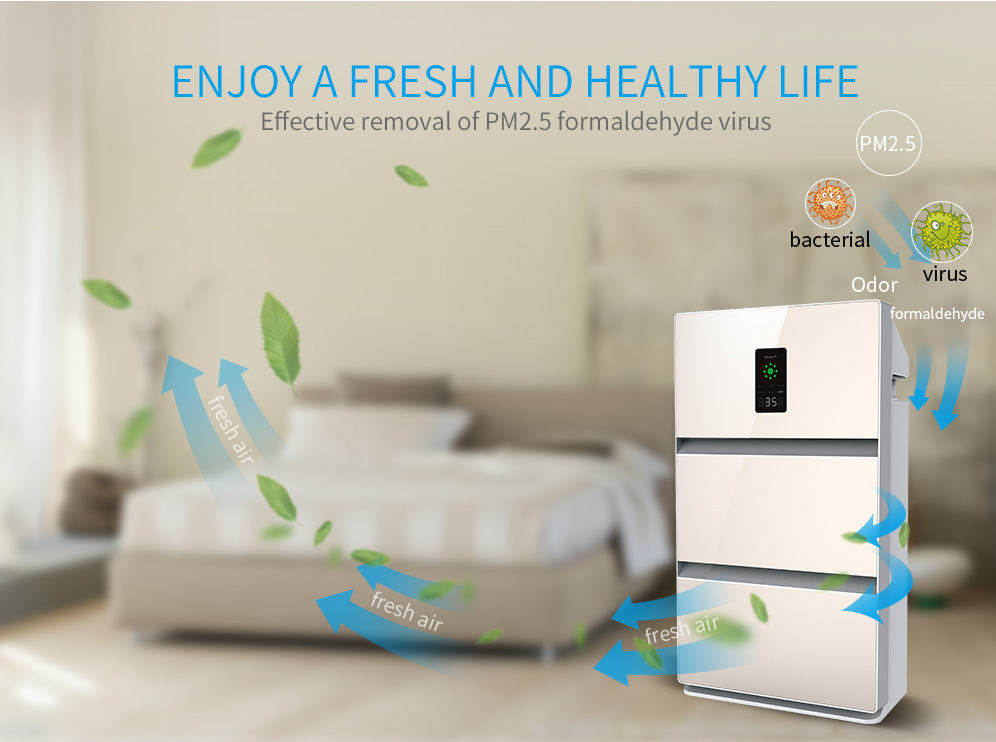 1.1 Test samples Through market research, 10 air purifier products were randomly selected, covering different grades of air purifiers with large sales volume and high market share. The types of technologies used in the selected air purifier products include the more commonly used technologies such as HEPA, activated carbon and static electricity.
1.2 Methods
1.2.1 Test conditions
The test of the tabletop HEPA air purifier product was carried out in a 30 m3 test chamber constructed according to the national standard “Air Purifier” (GB/T 18801-2015), and equipped with a gaseous pollutant generator to quantitatively inject formaldehyde gas into the cabin, the test environment The temperature was (25 ± 2) ° C and the relative humidity was (50 ± 10)%. The concentration of formaldehyde was detected by phenol reagent spectrophotometry. The main types of equipment were spectrophotometer (Shimadzu UV-2600) and sampling pump (Qingdao Yingying BX2400). The power and standby power are tested according to the Safety of Household and Similar Electrical Appliances Part 1: General Requirements (GB 4706.1-2005). The main equipment is Power Tester (PA3000).
1.2.2 Test method
Before the test, the purifier was placed in an environment with a clean environment and the temperature and humidity conditions were satisfactory for 1 h. Place the purifier to be inspected in the environmental test chamber, adjust the purifier to the rated state of the test, verify that the operation is normal, and then turn off the purifier. Turn on the high-efficiency purification device so that the background concentration of formaldehyde is less than 0.10 mg/m3. Turn on the injection mode (stirring fan, circulation fan on), and use the gaseous pollutant generator to inject formaldehyde gas into the test chamber, so that the initial formaldehyde concentration in the test chamber reaches (0.80~1.20) mg/m3, and the injection are finished for 10 min. The sampling mode is turned on later (the circulation fan is turned on). The gas in the test chamber is collected through the sampling hole, and the initial sample is first collected to determine the initial formaldehyde concentration. The natural decay experiment was started, and the gas in the test chamber was collected once every 5 min with the top-rated air purifiers 2019 turned off, and the total sampling time was 60 min. Start the total attenuation experiment, open the air purifier through the operation hole, and move it to the center of the test chamber. The sampling process is the same as the natural attenuation experiment. During the entire test, the constant temperature and humidity system are turned on to ensure that the temperature and humidity meet the experimental requirements. Sample points and data with a formaldehyde concentration of less than 0.10 mg/m3 are considered invalid. If the number of data points is less than 6, the sampling interval is shortened and the porous cross-sampling method is used. 1.2.3 Data Analysis Method
1.2.3.1 Determination of the concentration of pollutants over time by the amount of formaldehyde clean air
Conforms to the trend of the exponential function, as shown in equation (1): where: ct is the concentration of formaldehyde at time t, the initial concentration of formaldehyde at t = 0, k is the decay constant, and t is time. According to the linear regression of lust and t according to the formula (1), the attenuation constant k can be obtained, as shown in the formula (2): – to improve the removal effect of formaldehyde, so the purification technique used is not the air purification effect of the air purifier. The decisive factor of the bad, the purification effect depends mainly on the comprehensive effect of the filter material performance, air volume, fuselage structure and other factors [2].

In this study, 10 kinds of air purifiers with different purification effects were analyzed. It was found that “HEPA+ activated carbon” technology is still the mainstream technology used in air purifiers, and some products are also combined with technologies such as static electricity and silver ion catalysis. However, these techniques did not significantly improve the removal of formaldehyde and did not significantly affect the power consumption. The cylindrical air purifier increases the effective area for purification and the formaldehyde removal rate is higher. Through the comprehensive analysis of the amount of clean air and power consumption, it is found that the greater the power consumption, the better the purification effect of the air purifier, and the product with relatively close clean air volume may have a large difference in power consumption. It is easy to be misled when purchasing. The purification effect has a certain positive correlation with the amount of clean air and can compare the overall performance of the objective reaction air purifier, and should be used as the main reference indicator for purchasing an air purifier. The overall performance of the air purifier is related to filter performance, air volume, design process, and other factors. For consumers, it is not necessary to blindly pursue high clean air volume when purchasing and should be based on the use area and cleanliness requirements. In actual practice, purify energy efficiency as an important reference factor and choose a product with higher cost performance. For production enterprises, it should be consistent with national energy conservation and environmental protection policies and closely integrated with national industrial development policies. It is not only based on the level of clean air but should be optimized from designing processes and reducing energy consumption. Overall product performance.