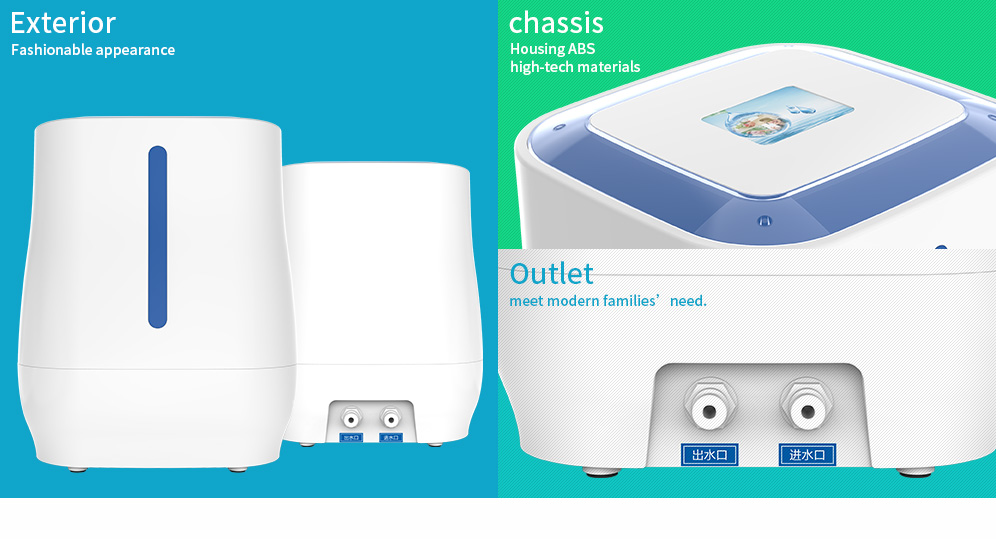 Let’s talk about the advantages of several water purifiers. According to your own needs, do not blindly follow the trend, by the way, try not to buy the so-called direct water purifier, most of them are basically pit people, expensive, filter expensive, salespeople generally love exaggeration The actual role of the water purifier. What are the advantages and disadvantages of ultrafiltration water purifiers?

The ultrafiltration water purifier uses an ultrafiltration membrane. The advantage of this top 10 room water purifier is that it is relatively inexpensive. But its filtering ability is far less than RO reverse osmosis. It can filter sediment, rust, larger molecules, etc. in water, but it can’t do anything about pesticide residues, heavy metals, scales, etc.

Ultrafiltration water purifiers are suitable for use in areas where water quality is good, such as municipal tap water, and ultrafiltration can meet daily needs.

For the treatment of very small molecular pollution, such as organic pesticide residues and heavy metals, RO water purifiers are the most ideal products.

1. Advantages: Ultrafiltration water purifiers usually do not need pumps or power consumption. Generally, the normal water pressure of municipal tap water is used. The main advantage is that the pH of the effluent can be kept constant while retaining dissolved oxygen in the water and trace minerals required by the human body. Therefore, the ultrafiltration membrane water purifier can also provide drinking water that meets the safety and health concept, but the filtered water is It is not possible to achieve direct drinking, which is the most direct difference between it and the RO water purifier.

2. Disadvantages: The effect of the ultrafiltration water purifier on the removal of chemical pollutants and scale in water is not as strong as pure water.

1. Advantages: It can remove all kinds of harmful impurities in the water. The taste of the water is better, which can effectively reduce the hardness of the water. The container after boiling water does not produce scale.

2, shortcomings: reverse osmosis water purifier to use the pump, need to be energized, the price will be higher than the ultrafiltration water purification opportunity.

The role and characteristics of the water purifier 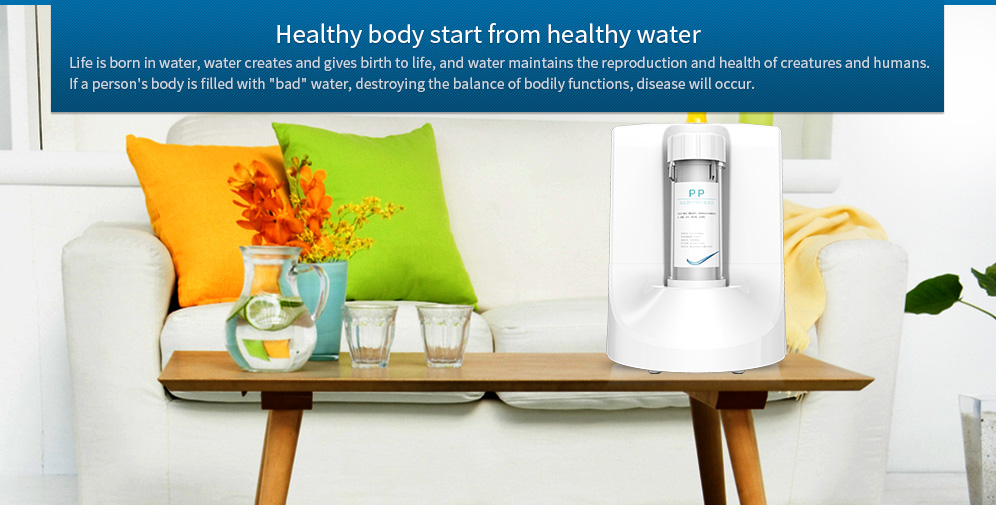 Speaking of the water purifier going back to the space program of the United States in the 1960s, everyone knows that people can’t drink water for a long time, and the astronauts who carry out the moon landing plan have to stay in outer space for a few months, carrying the spacecraft under the weight. Restrictions can’t carry too much water. Solving astronauts drinking water is a big problem. Scientists later put their ideas on the astronauts’ urine for this problem. They invented the water purifier to let the astronauts pull out the urine in outer space. After purifying into a pure water machine, circulating drinking, eliminating the load of the spacecraft carrying drinking water. It was only in the 1990s that this purification technology began to be used for civilian use. This is the source of household water purifiers.

02
Multi-layer gradient structure, large amount of dirt
The PP cotton filter adopts a multi-layer gradient structure: the outer layer is coarse and the inner layer is fine; the outer layer is relatively loose and the inner layer is tight. This multi-layer gradient structure allows each layer of the PP cotton filter to intercept and store impurities in the water, and the amount of dirt is naturally large.
03
Clean and hygienic, large filtration flow
PP polypropylene filter raw material polypropylene fiber is entangled by self-adhesive, does not require bonding of other materials, and has a clean chemical composition that meets food hygiene standards. In addition, the three-dimensional labyrinth structure of the PP cotton filter allows it to have a larger surface area and a higher porosity. The large surface area and more small holes allow the water to pass through the PP cotton quickly, and the filtration flow is increased.

04
Good stability, acid, alkali, organic solution, etc.
The raw material of the PP cotton filter is polypropylene. The chemical stability of polypropylene is very good. Besides being attacked by concentrated sulfuric acid and concentrated nitric acid, it is stable to various other chemical agents. Because PP cotton has good stability, it is widely used in various fields such as chemistry and electronics.

The reason why PP cotton is widely used in the pre-filter filter of water purifiers is precise because of these advantages and the low production cost. However, the PP cotton filter can only filter out large particles of impurities in the water. For heavy metal ions and microorganisms in the water, it is also required to be subjected to deep filtration treatment for the subsequent filter element.

The role of the water purifier is not just to drink water!

Many people in the modern world choose to evade many things without knowing three words, but often you don’t know but it doesn’t mean it doesn’t exist. Just like water, seemingly clean water does not mean the presence of no dirt. Even if it is not seen by the naked eye, it will still damage our body and affect the health of ourselves and our families. Especially in this fast-paced, fast-paced era, heavy industry pollution is flooding every inch of air and water we have. Although we can’t choose air, we can choose good water.

This kind of system is generally installed behind the water meter of the household water inlet pipe. The main function is to remove impurities visible in the water, such as sand and rust. It is used to protect daily household appliances from water and to prevent blockage of water pipes.

Second, the end of the direct drinking system

This system is actually a combination of a central household water purifier and a central water softener based on the end drinking system and the front water purification system. The central water purifier is connected to the pre-filter and is generally installed in the kitchen. It can effectively remove residual chlorine, bacteria, viruses, heavy metals, and various organic substances in the water to ensure the water is clean and sterile. The central water softener, as its name suggests, is the water purification system that softens the water. The main function is to use the resin separation technology or nanocrystalline technology to remove excess calcium and magnesium ions in the water and reduce the hardness of the water. It is generally used for bathing and washing clothes, so the cleaning will make the skin is smoother and the clothes are softer.

What can the household water purifier filter? 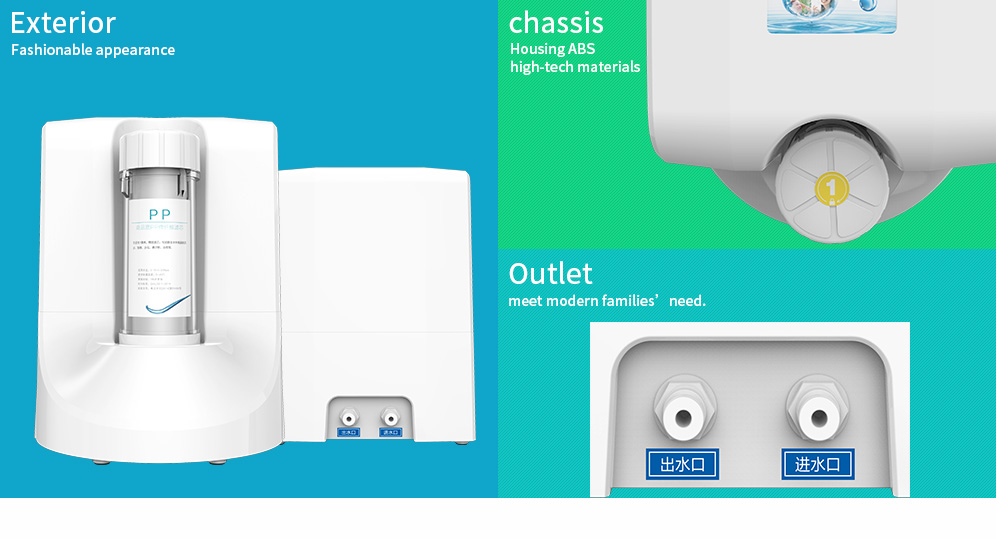 The water is transported by a galvanized iron pipe, and water and iron are oxidized to form red iron oxide, which further oxidizes to form black ferric oxide. Pipes in new buildings are more susceptible to oxidation. The faucet is turned on for the first time every morning, and the red material in the effluent is rust.

Excessive iron content, not only the perception, poor taste, long-term drinking, will increase the burden on the kidneys, leading to disorders of the endocrine system, high blood pressure, and other diseases.

2 aluminum and other heavy metals

During the transportation process, heavy metals such as lead are dissolved in the water. Long-term drinking will increase the burden on the liver and kidneys of the human body, and easily cause diseases in the liver, kidney, heart, and nervous system.

Chlorine is a strong oxidizing agent with a pungent odor and a mouthfeel. Chlorine is a tap water disinfectant widely used internationally.

1. “When chlorine interacts with organic matter, such as sweat, it is easy to cause the formation of nitrogen trichloride in the surrounding air, which is very likely to damage the eyes and throat.”

2. “Residual chlorine may cause heart disease, coronary atherosclerosis, anemia, hypertension, liver and kidney discomfort, asthma and emphysema. For many years, the risk of cancer will increase!”

Whether it is surface water or groundwater as a source of water, bacteria and E. coli in tap water can be said to be ubiquitous. The harm of bacteria and viruses, I believe this is no longer necessary.

The World Health Organization (WHO) survey shows that:
80% of the world’s diseases are caused by water pollution; about 1.2 billion people worldwide suffer from drinking contaminated water; 50% of global cancers are related to drinking unclean water; 50% of global deaths are drinking and contaminated Water causes; 25 million children under the age of five die from diseases caused by drinking contaminated water; more than 5 million people worldwide have cholera, diarrhea, and malaria caused by water pollution.

How to choose a household water purifier, after reading this knowledge, you will not worry about choosing a water purifier in the future. Pre-filter: Generally, it is installed on the surface of the water meter of the inlet pipe. It is the first coarse filtration equipment for the whole room. It can filter out the sediment, rust, large particles and so on in the tap water. It also stabilizes the water pressure and protects the water purifier equipment connected to it. Central water purifier: The most important thing is to carry out a more effective purification of water by the adsorption of KDF filter and activated carbon, which can remove many sediments, rust, bacteria, suspended solids, algae, macromolecular organics, etc. A poisonous and harmful substance can well retain the minerals beneficial to the human body in tap water, and the treated water can directly reach the quality standard of drinking water. Central water softener: This kind of water purifier is made of natural resin to exchange calcium and magnesium ions in water, which can reduce the hardness of water and soften water quality. It is called “soft water machine” and can also reduce water mine. The wear and tear of the clothes on the clothes and skin can protect our skin, protect the clothing, and prevent the minerals in the water from producing yellow spots in the sanitary ware, tableware and other supplies, and prevent the water pipes and water heaters from generating scale, which can be better and convenient. Everyone’s domestic water. Terminal straight drink machine: It adopts high-precision five-stage filtration design. The tap water is filtered at the water terminal, and the water directly reaches the quality standard of raw drinking water. Unscrewing the tap water tap can directly Drinking, to achieve the effect of the instant drink, avoid secondary pollution of water quality, water activity is relatively large, retaining high oxygen, can promote human metabolism, enhance the vitality of human cells. The water purifier has an exclusive space Technology, super five-level purified water effect, can give good quality water to the upper layer of the whole household.

Secondly, we can choose the water purifier based on the actual needs of our home. If the water quality of the household is relatively good, the water does not have obvious abnormalities such as color and odor. You can choose a combination of a pre-filter and a central water purifier to remove sediment and rust from the water. Bleaching powder, bacteria can be; if the water quality in the home is relatively poor, you can choose the combination of pre-filter and central water purifier plus terminal straight drink machine, which can ensure the health of drinking water well; The scale phenomenon is obvious, the hardness of the water is relatively high, then the water needs to be thoroughly softened, and then everyone needs to use a water softener to facilitate domestic water. Under the premise of economic conditions, or the effect of water treatment is relatively high, you can choose to install a full set of water treatment system so that drinking water and domestic water can get the best treatment effect.

What is the principle of the water purifier?

What are the main pollutants in the air and what kind of harm will they cause to people?