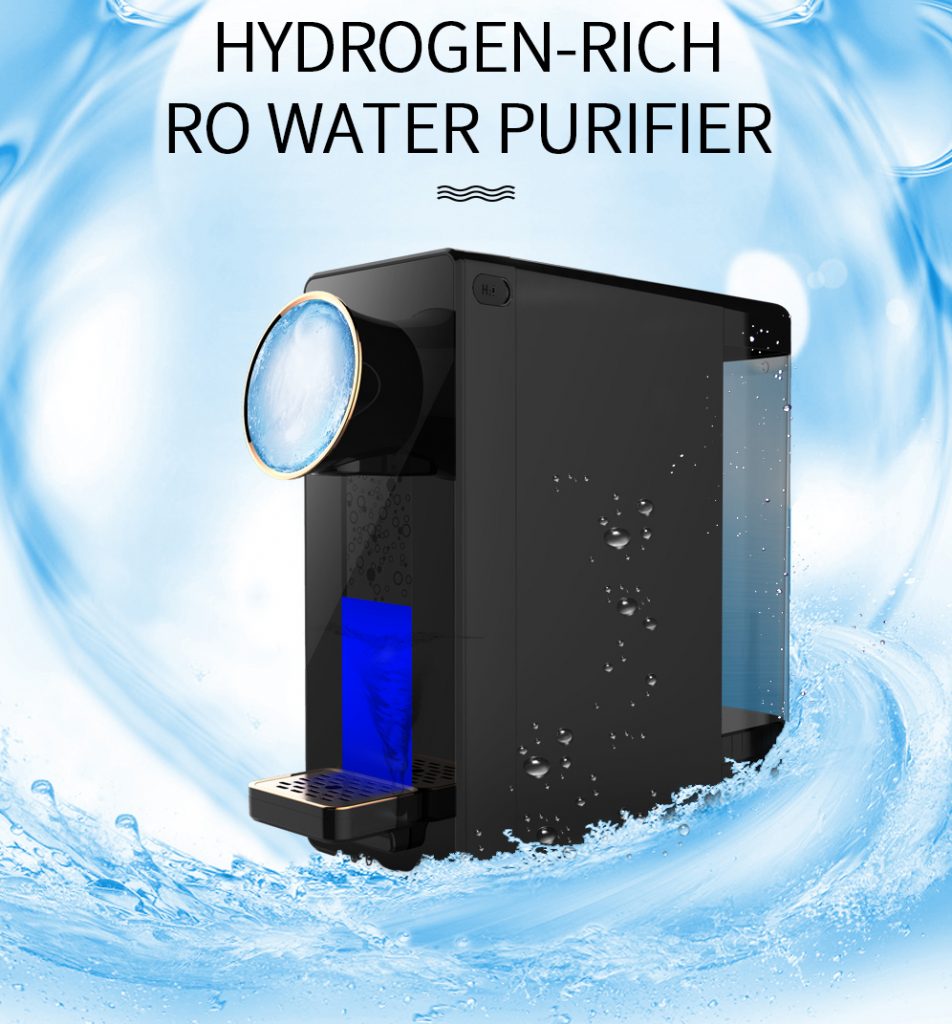 2. Hydrogen is a gas that is colorless and has a lower density than air. Among various gases, the density of hydrogen is the smallest. Hydrogen does not dissolve in water, but the solubility is indeed low. The invention of domestic nano-gas-liquid mixing technology overcomes the scientific problem that hydrogen is hardly soluble in water. The preparation method of hydrogen-rich water is to use physical methods to uniformly encapsulate hydrogen molecules and promote a stable combination of hydrogen and water. It has the characteristics of high hydrogen concentration and good stability.

1. ‘Water quality determines physical fitness’, but there are not many people who can truly understand the importance of water to life and health. Therefore, some people call water ‘a forgotten nutrient’.

2. According to World Health Organization (WHO) agencies, 80% of diseases in developing countries and one third of human deaths are rooted in water.

3. Professor Li Fuxing, director of the China Health Drinking Water Professional Committee, proposed that the water we drink or the water we use will actually shorten our lives.

4. Good water determines life. The hydrogen-rich water is not only clean, but also has hydrogen and energy. The water is a small molecule living water mass. The negative hydrogen ions absorb 80% deeply, purify the blood, make the blood flow smoothly, and have strong metabolism, prevent various diseases and improve human health.

Third, the mechanism of action of hydrogen-rich water

1. The effect of hydrogen-rich water on health is that it contains hydrogen, and water acts only as a carrier for hydrogen, and it does not function by itself;

2. After drinking hydrogen-rich water, hydrogen is absorbed by the gastrointestinal tract and enters the blood faster than water, and is transported to various organ tissues throughout the body through systemic blood circulation.

3. The biological role of hydrogen is to remove active oxygen or free radicals in the body. The human body may produce excessive reactive oxygen free radicals due to ultraviolet radiation, environmental pollution, intense exercise, smoking and drinking, fatigue, excessive psychological stress, drugs, etc. Oxidative damage caused by increased free radicals is an important cause of many diseases and aging in human body.

4. Scientific research has found that the role of hydrogen in medicine is through ‘antioxidation’, ‘anti-aging’, ‘selective scavenging of free radicals’, and ‘anti-inflammatory’. Compared with antioxidants such as vitamin E, vitamin C, carotene and tea polyphenols, the advantage of hydrogen is selective oxidation, which only removes toxic free radicals, and has no destructive effect on the benign free radicals required by the human body.

5. Another major feature of hydrogen is biosafety. High-concentration hydrogen has been used in human diving for more than 50 years. It has not been found that any breathing high-pressure hydrogen has obvious toxic effects. It is precisely because hydrogen does not have any toxicity. The international academic community has included hydrogen as a simple asphyxiating gas like nitrogen helium. Japan, the European Union, and China have all included hydrogen in the food additive list.

Fourth, the application of hydrogen-rich water

2. Because hydrogen has the function of scavenging reactive oxygen species, healthy people can drink it for a long time, which may play a role in preventing diseases.

4. Hydrogen-rich water requires a conditioning process, and each person’s perception level and duration may vary due to individual differences;

The efficacy and potential market of hydrogen-rich water for treating diseases.

1. The first generation of hydrogen-rich water uses metal magnesium to produce hydrogen materials, which has the advantages of low cost, convenient carrying, and low hydrogen production. Long-term drinking will cause excessive magnesium intake.

2. The second generation of hydrogen-rich water adopts electrolysis method, which has the advantages of low cost. The disadvantage is that the requirements for equipment, electrode materials and base water are very high for safety reasons; the photo-particle hydrogen-rich water generator developed by the company ( Cup) overcomes many of the above problems. Water that is electrolyzed by a water cup does not contain oxidation factors and toxic by-products, and generates residual chlorine or ozone. If you test some inferior cups, you will find that these cups also contain a lot of bubbles in the water production, and the dissolved hydrogen content is also tested. However, if the residual chlorine titration solution is used for testing, the water will show a serious yellow color, which means that the water cup contains a large amount of oxidizing factor substances such as ozone, hydrogen peroxide and chlorate! Long-term drinking of this ‘disinfection, sterilization, degradation of pesticide water’ can be imagined for human health hazards. The technical bottleneck of the hydrogen-rich cup is still an insurmountable obstacle for some manufacturers.

3. The third generation of hydrogen-rich water adopts non-chemical non-electrolytic nano-preparation method, which has the advantages of high hydrogen content, stable hydrogen molecule dissolution, long shelf life and high safety. The disadvantage is that the technical threshold is high and it is difficult to popularize in a short period of time.

1. The frail and multi-patient group has obvious feelings. The average drinking time of the group will promote sleep, gastrointestinal smoothness and mental improvement.

2. For people with high blood pressure, high blood fat, high blood sugar, and fatty liver, there will be a decline or steady trend in indicators from 3 months to 6 months.

3. Adhere to drinking for more than three months and improve people, most of them will habitually continue to drink;

5. Young people or healthy people, self-feeling is not very obvious, but long-term drinking, such as cold, mouth ulcers, physical or skin allergies and other symptoms will be significantly reduced.

6. Due to its anti-inflammatory effect, hydrogen-rich water can also be used for hangover, topical acne and other aspects.